Once upon a time Enid Blyton was the biggest selling childrens author , J K Rowland rather spoiled that didnt she . You can still buy most Enid Blytons , but theyve been sanitised for the most part. Now i can see the golliwog references will cause offence  in Noddy , but im not throwing mine onto the bonfire of political correctness , my grandson has a mixture of those his mum and uncles had as kids and newer editions with naughty goblins . Lets hope no one ever finds a goblin for real .
Meanwhile theres the under the counter Runaway Kitten , never seen a reprint of that one , the big glaring mistake , poor old Enid called a black kitten Nigger , yep offensive nowadays and i wouldnt read it to my grandson, but im not about to throw it away, when hes older i will explain why it could cause offense .  Hiding the way things once were from children is surely as great a crime as pretending these things didnt happen .
As to what has brought this little rant on , nearly 5 year old grandson has come home from school with a fascination with same sex marriage , well it has been plastered all over the media for months. His generation will grow up thinking nothing about it being other than another facet of normal . But there will always be those who object . I still feel a little uncomfortable at women vicars but I dont object to them .
So the verdict is that times change and like the dinosaurs some views will be wiped out eventually, we hope, but it doesnt mean they should be ignored and forgotten about 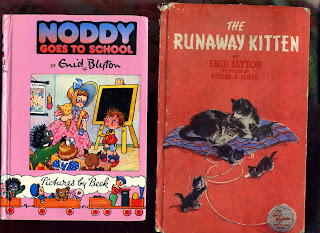