Its a real look out the window kind of day today , mainly at the weird stuff blowing past . Its getting worse and being as the power is already flicking on and off  i'm frantically ebaying into Katies Recycle . The joys of rural living, if the power goes out nobody rushes to repair it . Mr Bah humbug has been outside grumping and fastening stuff down , it looks like were just going to get the edge of it up here in Lincolnshire and as usual the poor West Country will take yet another battering . will see what happens overnight before i decide about work in the morning .
So today its been clean up the china cabinet day , a chore i loathe but it had got really bad , i've only got room for one cabinet and it sits on top of my beloved wreck of a desk and its packed , try not to laugh . None of the teen slaves were available to dust the top so were not going there . I have mentioned in the past that I have a small problem with collecting Alvingham Pottery , but i also collect a lot of other studio pottery it tends to be just single items because of the space factor , theres Foy , Isle of Man , weird unidentified ones that just catch my eye , take the owl plate unmarked but gorgeous . theres even a Spode Iona plate that i found for £1 a week after id visited there . 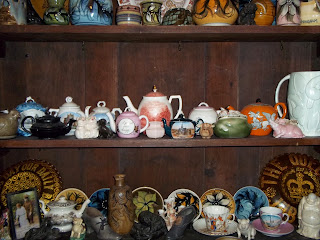 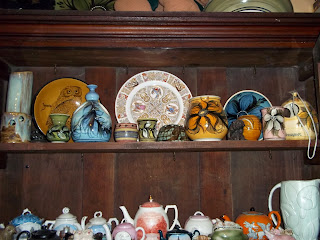 The teapots were a bit of an accident, nearly all edwardian transfer prints of places i've lived in or visited , ive got a little bored with them now , but they dont have much value so i may just box them up and replace with something out of another box..lol..theres pigs that my granny gave me as a child , stuff from the jumble sale i bought as a child , amber glass Victorian plates because i love it, all, taken out cleaned and replaced . 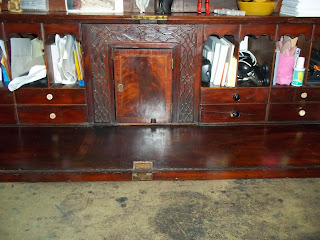 Now I know you all want to repurpose the cabinet get out your chalk paint and make it fashionable but its not happening , I must be the only person left who just loves wood and the smell of beeswax polish . I used to have 3 big cabinets when i had a house big enough, the biggest is currently languishing in a friends barn ...one day , one day