I am currently on leave as a full time kitten mummy .....i will be back
Posted by kate steeper at 22:30 4 comments:

Last week I was listening to a group of Police Officers gossiping , they were laughing at the fact that they are going to magic up an extra 10 000 police , cant even remember which party came up with this one . As one of them pointed out " They cant even recruit enough to keep the numbers up now , the pensions are shocking , the job stinks and everybody with any sense is leaving .
Then theres my mother ...AAARRRGGGHHH ...I already know shes a genetic Tory voter , if they said they were going to gas all benefit claimants and throw all the immigrants off the White Cliffs of Dover, they still wouldnt be hardcore enough for her . 83 and hates everyone..lol

He used to be in the IRA

No he didnt mother

I bet he supports the Muslims

Hes a pacifist mother , he supports everyone .

As you may have guessed , she was trying to get me to hang up and i wasnt taking the bait ..lol

Its all the scroungers dragging this country down , the bad back brigade they all want putting down , they should sterilize all the unemployed , just breeding more scroungers etc etc etc on and on and on .

So I just pointed out that ,once Mrs May had forced her to get an equity loan on her home and robbed her of everything but 100k  , she would still be in a care home ...its been very quiet since

A Week of Ordinary

What can I say , to much work none of it very profitable , my continuing problems with ebay ?
Nope its 3 jumble sale Saturday not quite shore how i will achieve this bountiful feast but im going to try..lol
12.00 Cherry Willingham village hall
1.00  Dunholme Village Hall
1.30 Minting Village Hall

plus a table top sale at Metheringham 9am  that i should be rushing to , but ive just got out of the shower and im not moving fast this morning..lol
Plus theres a Cream Tea and table Top in Timberland Village Hall  thats hardly been advertised at 2.00 that sounds good to me on the way home if i havent spent up

So this is the quick guide to what you do in rural lincolnshire on a Saturday , really i should be stuck at home doing endless chores for this thankless bunch...sod um!!!!!

Did you witness the appearance of Mr and Mrs May on the One Show ?  all very strange but her and her OH seem to still like each other after a lot of years . I can never fault her taste in shoes ( see I said something positive)  sadly I can never forget the designer leather trousers made from the skins of  Sanctioned Benefit Claimants she wore a few months ago .
Then there was the time she lost a few votes this week  by mentioning that she thought fox hunting was a good idea , see they let her off script for a minute and her campaign managers are crying in the corner...lol
Meanwhile young Jeremy Corbyn seems to be quite enjoying himself tootling round the country , kissing dodgy babies and shaking the hands of all and sundry . Bless him he achieved the status of demigod when he managed to run over a BBC reporters toe from the passenger seat of a car driven by police protection . I really like the bloke but i can see his faults and it does seem his campaign is being managed by Simon Cowell its a wee bit One Direction .
Our local candidate has once again stunned us , someone did point out they thought they were hallucinating walking round Sleaford  this week , its Shetland ponies up and down the High Street in Vote Conservative banners .
So heres my overview.

Are the Conservatives not taking this Election at all seriously , do they really think they cant possibly lose?
If they do lose , are they counting on the incoming boundry changes to finish the Labour
Party
The CPS have decided that they cant possibly prosecute anyone for electoral fraud . Bleedin Scary, has it been pointed out that the CPS will cease to exist if they do?

Just remember one party politics is what runs North Korea and Syria , thats the really scary thought !!
Posted by kate steeper at 06:53 No comments:

When did ebay become so damned complicated?  really struggling with it at the moment not running the shop just using it to sell a few bits and bobs that we dont need , it just seems to be designed to run on a smart phone . Something i dont have and try to avoid at all costs , in fact mobile phones are the one aspect of modern life i detest , I could live without one if it wasnt for work .  Then my wretched phone decided to ring 999 under its own steam this morning 3 times in a row .Why just Why!!!
Got a long lecture about wasting their  time , i heard it talking to itself or i would never have known , apparently EE are experiencing network problems . So ive turned it off and chucked it into a drawer till i need it .
The only pleasure is veg gardening down in the windswept wilderness , bleedin mice have nobbled my sweetcorn it had nicely got shooting up , the potatoes are just up , lots of orkney blue again this year, its a short season potato so the cabbages will go in straight after theyre done , couldnt find my favourite pink fir apples this year , unless i ordered them which i couldnt afford . Theyre may be a few strays pop up, im hoping . Somewhat surprisingly im getting a bit of help from my son , im not complaining , digging reduces me to agony .
The greenhouse is likely never to get finished , mainly because Mr BH is an annoying perfectionist , if hed just vanish for a couple of days it would be up and working , I dont need perfect i just want it up .
Must get round to sorting the strawberry netting , the thrush will be so frustrated but i want to leave them to polinate for a couple of weeks first , then theres the cabbage nets to sort out , the joys of living in the countryside , the wildlife wants to share all your food !!
Mr Bah Humbug went to see some kittens yesterday they will be ready in a couple of weeks, I knew he would give in eventually,  a small furbaby would cheer everyone up , he wants two but we can barely afford one , we arent on Income Support so dont qualify for help with the cost of neutering .
On the Thrift side I managed to get to a Car Boot at New York on Sunday , no its not a large place its a crossroads with a barren windy field with added bucket bog , tons of stalls lots of great stuff and i bought a tray of cauliflowers and calabrese,  they are much further on than mine so it gives the crops a head start a whole £2.00 spent .
I'm going to try and flog these JAJ pyrex lovelies on facebook , my favourite pattern but they would be just stuffed in a cupboard unused so they need to go . If they dont sell I will hide them somewhere ..lol  you can have to many mixing bowls !! 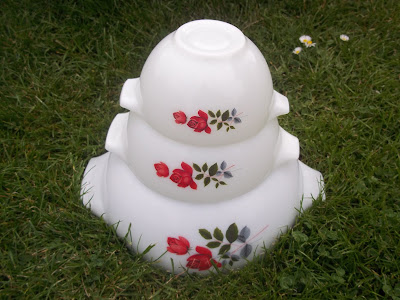 Caroline Elizabeth Johnson – The Conservative Party candidate for Sleaford and Hykeham ...pair of supporters  seen riding round Sleaford town center in a couple of Sinclair C5s Tuesday ...Why just Why ? Nothing better to spend funds on ? After all Attila the Hun could sit as a candidate for the conservative party here and get elected , we are an area of nothing but pensioners and most of them arent poor . The poor and the disabled are mostly shunted out to the villages to poor quality council accommodation so its easy to believe everythings just fine here. Sadly my vote is worthless here , the blue rinses and the farming community will vote Tory forever .
So I will leave you with this doodle that came to mind the other day , I think it sums it up , with apologies to Pastor Niemoller 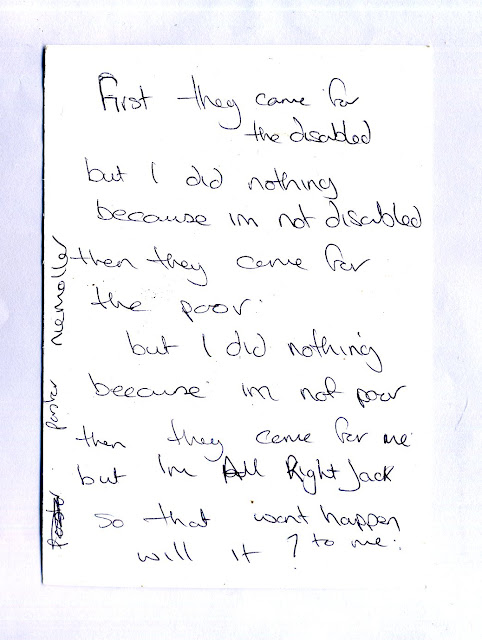 Well this has been exciting , do you ever get one of those days when you want to slaughter the rest of the world ? Once upon a time I had my hormones to blame now theyve dried up I think its just me ..lol
The plan was to get up and do ebay all day , ive mountains of stock kicking around in here and id quite like to see the floor . But nothing is that easy these days we seem to have a charger  thief in this house not sure who but i will hunt them down and kill them , took hours to get a wire to charge the camera .
Then theres the fact that my little finger is off on a mission of its own and its constantly catching the caps lock , it does this from time to time just to annoy me , ive tried taping it down but then my hand twists so i cant type properly , I look like a Victorian Dowager waiting for her cuppa tea .
Mr Bah Humbug is driving me mad as well , everytime i start anything theres a compelling reason he needs me, plus hes on a ,everything i say is wrong mission and hes feeling the urge to constantly correct me ,I know hes in pain but hes behaving like a total twat and now hes finally nodded off on the sofa I thought i will sit down and do a load of ebay listings. in fact ive managed to list 3 lots of wool because ebay doesnt like my photos or the brands or the bleedin EAN no , still clueless what that actually is but someone on the ebay forum said to just type in, does not apply , it worked!!
On the plus side ive managed a cat jumble sale on Saturday up the Birchwood , got all the curtains for Young Baldricks flat for a whole £3 then found out the price of curtain track is bleedin scary, so playing hunt the cheap curtain track at the moment . Moving day is Tuesday for him , still hasnt got a bed but hes got a sofa and a duvet so he will have to manage and hes also got a lot of noodles till his cheap cooker arrives .
The jumble sale also yielded next winters wardrobe for me , love it when unseasonal shopping is so cheap , got this little gem as well , Peace plate from 1918 complete with HMS iron duke and a bit of retro Wedgewood . Sneaked out to the car boot yesterday and all i came back with was a big xmas cactus and a couple of Lavender plants , lots of snide remarks about can we eat them !! 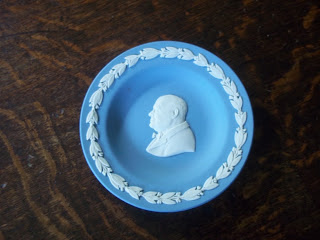 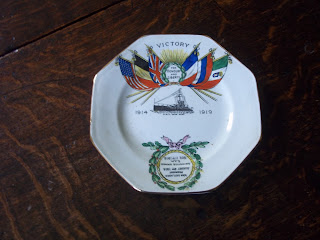