I know i do some daft things , but i snuck out for an hour on Sunday morning to the local car boot its just in the next village and if you get there before 8 theres just a nice amount of people pottering about . Himself had finally nodded off after nuking him with industrial painkillers so i figured he could be left . Anyway id pottered round the whole thing and bought nada , i was looking for cooking apples but they are like gold this year . Stopped to talk to one of the old guys whos always there and he says dont you like dolls?   And with that whips out a whole box full of Barbie type creatures £3 so i have a polite root among them and then he says thats the price for the box , so guess what they came home with me . I thought i could clean them up and brush their hair and charity them if nothing else , theres 30 dolls most are salvageable, the clothes have gone to the wash and im going to be brushing hair for a week . Then i started looking online . Have you seen the prices of teen dolls new ? scary.  Then i asked a mate who works with loads of local charities about where they could be donated . Same problem as usual , unless they are new and sealed in a box the big charities dont take toys , most just bin them . So i just have to find one of the small church or animal charities willing to take them , shouldnt be a problem theres a good few locally . If not i may bundle them up and sell them on facebook then give the money to foodbank . Anyway the point is this just gives me something to do thats different from endless medical matters . Plus the look of horror from himself and son when im sat humming to myself brushing dollys hair and wet wiping Snow Whites crotch is worth every penny ...lol 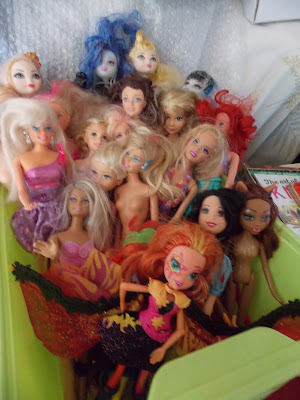 Its been a bitch of a week . Himself  decided we should go to Skegness for the day , i really dont like going unless its the middle of winter , to me its just a chore and the fact i have to lift that crippling buggy out of the car . Blinding sunshine , gorgeous day but  it wasnt for me . Hoards of crazed old grannies running you down on their buggies , fag in hand and chihuahua balanced in the basket on the front . Everywhere its like a bad Benidorm , so he scooted up one street and down the other , i get a whole rant about why im not going in the shops , but i see little point in going in places that sell nothing i would want . I made an effort to go in Yorkshire Trading because they had an end of season garden sale , got a fly screen for next year and a couple of new bird feeders , that was it .  Then he decides hes off to treat me to a Burger King , had to laugh its shut down , in fact it was the only empty property we saw .  I just wanted a cuppa by this stage but no chance he decides he wants Mc Donalds takeout ..UURRGGHHH

So by the time i got home , i wwas knackered from running after him on his buggy , then spent the night up being sick from the soddin tiny mcDonalds or lifting his shitting buggy not sure which . But it got better the next night his nose popped about 9pm and it wouldnt stop so rang for the ambulance they said it would be at least 2 hours but it came in 40 minutes , there was much umming and arring about taking him in but they decided to cart him off yet again . He spent 2 hours holding court in the back of an ambulance outside casualty then they found out why i had insisted they take him , he collapsed yet again . I still had to fetch him at 6am they have no beds and they decided to not top up his fluids this time just to see what will happen . They are once again reporting the GPs for failing to monitor him despite repeated requests from 3 consultants and casualty . But it still means that im left here on my own , with his collapse risk high and no means of moving him if he does blackout , plus a possible 2 hour wait for an ambulance .

So as we head into Autumn , we are greated with media stuffed full of your going to starve or your going to freeze . Good choices ?  Yes its annoying having to shop around to get what you want or waiting for the lucky dip that is your supermarket home delivery . But theres still plenty of food out there at the moment , its a tad disquieting to visit Farmfoods for your teabag multipack and a winters worth of wash powder amd find theres folks going full on doomsday apocalypse shopper but if you have a large family whats the alternatives , i think if your kids have left the nest its very easy to forget just how much teenagers eat if youve two or three its nightmare levels of consumption . Realistically making sure you have a couple of gallons of cooking oil and two or three sacks of spuds on stock isnt a bad idea also enough pasta for a small army and dont forget vacuum packed rice is near bloody immortal . I admit to having pack ratted a good few chicken UN ration packs , pre cooked and just chuck in with what ever sauce you can devise . Daughter came the other day and she couldnt find sugar to make jam . Im not jam making this year unless the urge takes me , the younger generation can learn ...lol  I think what im trying to say is that the older generation are less panicked by what goes on around us , we have the knowledge to make do and adapt and get by that we need to pass on to the younger generation so they dont become so stressed by our idiot media ...............Oh and on the no heat front , dont forget to buy half a dozen hot water bottles , fingerless gloves for everyone , lots of wooly slipper boots and rechargeable lighting or wind up torches ...ffs no candles , get your inner boy scout on , because winter is coming

Im still here !!! but when you both end up with a nasty stomach bug at the same time in a house with only one loo its fun , plus you have to care for your other half while wanting to crawl into a ball and die yourself . Of course , i then manage to pick up a nasty skin infection on top , which had to be home doctored and sort of ran me into the ground . But dont worry about us Mr BH has a telephone appointment with our latest GP today 7 days after it was requested !!  even better our new GP is the strange bloke with a dicky bow and the name with no vowels we had a few years ago .  He repeatedly screamed at My OH that he was an alcoholic and needed to admit it at which point he found out that his patient could be just as loud back at him . it ended up in a complaint being lodged . But saying that it has taken 10 years for them to find that my OH actually has a genetic condition that mimics alcoholism so ho hum life goes on . i  think i may hide down the garden .

On the garden front im officially way behind , most of the fruit went to waste , still tons of raspberries coming ready . Apples dire , tiny and full of worm . But the fact that nobody seems to have apples at the gates this year means its just a bad apple year .  Grandson dug the potatoes this weekend and they have been a pleasant surprise , ive mountains of them , celery is doing well . leeks are small but thriving among the weeds , my pumpkins all shrivelled and vanished during the sunshine which is somewhat baffling , cabbages look good in their cage so not too bad a year veg wise . The hedgehogs im feeding seem to be doing a good pest control job . The just grow what we like ethos does seem to have worked quite well though im going to miss my winter squashes for soups and stews . Must get my seeds ordered soon ..lol

Ive had a good week , disabled fishing Thursday so a day of peace until i spotted a £10 TV unit on facebook in the next village . quick pop down to collect and then one of those jobs you wish you never started .  The old Tv unit didnt want to move and i had to move so much stuff to get it out and then get my whinging slave to help me lift it out , it hadnt been moved in years it was so heavy and dated from the days of huge TVs . Why is their a plague this year of spiders that are a dot of a body with thin legs you can barely see ? they seem to make webs everywhere in no time as fast as you hoover them theres 10 more . So we eventually got the new one in its higher and smaller which is what i was after plus its nice boring pine instead of a grey and glass monstrosity. i also with no witnesses threw all the old game consoles into the dustbin , the kids just abandoned them here for Mr BH to try and fix which never happened . saved the toughened glass shelves from the unit for shed glass repair . The screws went into the screw jar and im afraid the wood is compressed chipboard so will have to go to the new bonfire pile . waste not , want not and all that . It took till bedtime for Mr BH to notice what id done , his first question was what i had done with all the consoles?  I told him they were in the box behind the unit , the empty box he cant get to . You even have to be crafty throwing stuff out these days since he got the security cameras put up , so that he can watch us when hes out on his phone . Joy ..Today hes going to a car show with useful son and daughter and grandson are hopefully coming to help fill the bin some more .