Well thats this years anticlimax over with. So contrary to certain family members imput I hadnt decided to join the death list for 2016 despite them all reminding me that im the same age as George Michael  . I had just decided that I should live by the motto "if you cant say nothing nice ,then say nothing "
Everything ive said over the past few years on the xmas subject still applies , so I thought it was a good time for a blog break .
So what has xmas bought me?  little prizes on the competition front , lip balm from Burts Bees and a really nice craft book from Popular Patchwork.  Prezzies?  Well im sure the family are convinced im an alcoholic !!
On the life is grim front , we have had heating, the freezer is full and ive actually been paid , i did buy little presents for them all and they were just as unimpressed as they were when i didnt buy them anything , go figure .
I did get a surprise gift from my daughter, a Fire Amazon thingy , still somewhat baffled , it comes without any instructions and plays endless Amazon adverts   but i have managed to play mahjong on it and it lets me read my kindle downloads . Im sure it can do loads more but i will set it a task a day , technology has rather left me standing still, but i can usually figure stuff out eventually . I think its a sort of a large print smart phone that doesnt include a phone...lol . The diary function probably has preset babysitting and washing lists...lol
Very quiet xmas indeed, we have seen no one , done nothing and had yet more worry on the Young Baldrick front ,  it was decided that he would be invited for xmas, it would be up to him what he chose to do . So I contacted his housing scheme only to find out that he had left over a week ago . To parts unknown . so we rang round the relatives to be told he was on the run from the police after stealing a car?? which explains the police constantly doing drive bys as this is one of his known addresses ,   please remember he is registered blind. He was spotted in Tesco doing his xmas shoplifting by another relative ,  he told them the car business was all a misunderstanding , between his girlfriend and her ex husband and was sorted .
Sorted my arse!! Last night we get a call from a lovely young girl on his behalf it turns out there are people looking for him and she had found him hiding in her garden hysterical because they had tried to kidnap him ....really ...now this could be just psychosis from not taking his medication , or it could really be his drug dealers looking for him over money , he wanted to come here , but its not happening .
We told her to contact the police straight away, so hopefully hes in a cell somewhere as we speak , what the past year has taught us  is that you cant help people who just use you everytime .
He needs proper professional custodial help , not this care in the community claptrap they keep on foisting on him , the odd visits from community psychiatrics if they can even find him , has helped him not in the slightest . Have we reached the end of the Baldrick Chronicles I think not
So to all a Merry Xmas ...thank God its over with for another year ..

Cherie hun  will scan that pattern once i find it ...lol

Now sometimes the Thrift Gods do smile upon me . So try not to laugh at this one . I attended .The Cats in Crisis Jumble Sale on Saturday , usual wonderful prices and mountains of stuff , now i was very lame and gimpy and full of painkillers so wasnt joining in the bunfight , i got a sweatshirt that didnt fit ..lol a cushion cover that does and a shirt for the material , spent not a lot . So i hadnt spent my budget and got some raffle tickets just because you can never give enough to a pussy at xmas .
Well i didnt take a bag, so to me it seemed quite logical to just reach under the table and buy one for 50p , took it home looked at it properly and thought thats quite nice leather might use that . Looked at it again and noticed it was branded Mulberry , now I'm quite a failure as a consumer and a female shopper . So when my daughter and her posh friend came home I chucked it to her and said do you want this for xmas?  we are a joke present for xmas family and we get great amusement on spending as little as possible . She grabbed it looked and said are you kidding me , this is real isnt it ?
Yep you guessed id accidently grabbed a genuine Mulberry handbag , complete with registration numbers and all the other weird stuff that the fakers dont get right .
So my daughters 50p xmas present would have cost an awful lot of money new , her posh mate was horrified she paid £750 for hers , my daughters vintage Mulberry cost 50p in really good condition just missing the clip on shoulder strap . Shes now using it for court so i cant even get a photo ..lol
Even better I got a phonecall to say id won on the raffle , picked it up and it was a brand new boxed blender a big posh glass one  , we all sat round and looked at it , then decided we had no use for it all , dont make smoothies just eat the fruit...lol ...so back to charity it has gone ....
And just for giggles take a look at this i noticed the other day , I just have visions of this guy sat watching Emmerdale with his slippers on and a cup of tea while slaughtering a cow , my mind works in strange ways ...lol 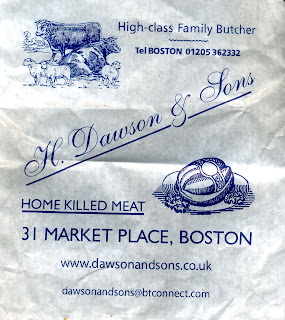 So they actually paid me a lot of the back money i was owed , did I rush out and pay my creditors...NOOOOO as a card carrying member of the feckless poor , I went grocery shopping and then recklessly squandered a whole £2 in a charity shop in Boston that is having a closing down sale , cant remember its name for the life of me but there was lots of wondrous bargains and its located in a tudor black and white building near the Guildhall museum . 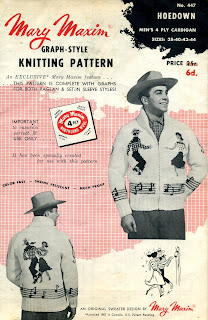 This had to be posted because it reminds me so much of    http://www.subversivefemme.com/   its so very Rockabilly . I love seeing the occasions they visit even if it is the other side of the world . 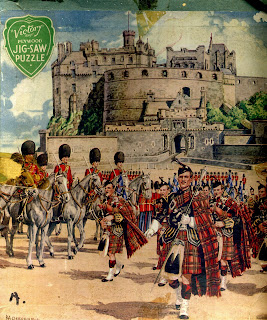 As for me , I treated myself to another vintage jigsaw I know i have a problem with them but they dont do counselling for a thrift shop habit . And anyway it has blokes in kilts and edinburgh castle so what more can i want ?
On the subject of what more can i want , ive been practically banging my head against a wall with Mr Bah Humbug and his daft xmas gift suggestions , bleedin men , he cannot get his head around the fact that im serious about wanting either a decent frying pan or a silicon rolling pin or even a decent mandolin not a v cutter . He says theyre not gifts .
I have tried with all of them this year i dont want more concert or event tickets  ive loved the ones this year but they have practically killed me and Mr Bah Humbug .
My xmas shopping is practically done, more origami for the munchkin is bought , my daughter has got the most expensive present shes ever going to get ( we will give you a laugh about this one shortly ) and son wanted a £5 tshirt on its way from China , im a little worried that they may be sending it by container ..lol . Mr Bah Humbug just to get , hes not a problem his narrow view of clothing makes it easy , if its not khaki , camo or original star wars  he wont wear it ..lol
Young Baldrick has disowned me publicly on facebook , bless him , Ive a feeling this is the fallout from the hospital trip causing this , plus a week at his mothers for his 21st , that he forgot to mention after we had organised a big tea for him . He didnt get that we dont do birthdays because of lack of funds, hed been posting online all the stuff he wanted and seemed to think we would get him him a tablet computer for his birthday , in this house you get a cake , tea and a card sunshine .
Just got to get a vile xmas card for my mother and thats xmas organised ...lol