It seems appropriate this being Remembrance Sunday and tomorrow Remembrance Day to bring up the subject of those we tend to forget , the women left behind when the men went to war
So meet my gran Clarie Exley , age 19 she joined the Womens Land Army in 1914, people tend to forget they had Land Girls during the First World War , but as she was already in service, it was probably a great adventure , this was one of the few things i have of hers . that and a few postcards and pictures that i need to root out, although she married Jack before he went on active service she was allowed to stop on even though she was married which was unusual . I wish i could say they lived happily ever after , but thats a story for another day . This a 1960s photograph of her ,we look very similar except for her addiction to bad perms. She spent  WWII once again working on the land and raising the last of her 5 kids alone , she raised a great many grandchildren after and that I was her last and her pet. So I will remember my gran today it just seems right somehow 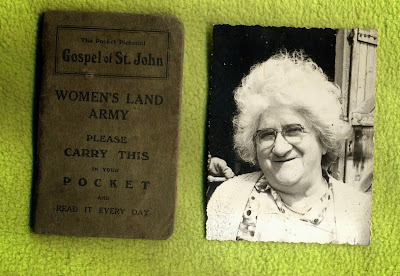