So the blog is dying of neglect at the moment , housing fun for useful son , hes found a flat , where he wanted to be , then they want a years rent up front  and somehow hes borrowed this , then its endless checks , it would seem that they wernt keen because hes a single male , trying to explain that hes a single male whos main interests are cars and steam engine rallys , not sex drugs and rock and roll  has been fun , nope hes not your average 24 year old male hes just quiet and nice , but we are getting there . I think its this business with the law changing on June the 1st where they will be unable to charge upfront fees , its causing panic among letting agents and landlords so theres very little property on the market at the moment . One bedroom flats are at a premium  due to the bedroom tax , its not a tiny flat its above Victorian shops in the center of town which means its going to be fun moving his stuff in , everythings ready to roll, the usual family and friends whip round , he doesnt need much,theres all his stuff here,another friend has donated a washer  as he says he can manage with a a mattress and a microwave for now . So im just tapping my foot waiting for him to get the keys then i can have my house back ...lol

Then you spot a local free ad on Facebook ,  none working sewing machine , so within an hour your picking it up ..lol . Turns out to be a 1970s heavy duty singer in a table and it works but then it started running on its own and pothering clouds of smoke out of of the foot...lol  that woke Mr Bah Humbug up ...lol  he does get in a panic but its a familiar problem and the little part is on order for not a lot of expense .  Not a clue what im doing with her yet , ive not got the space , ive got a few machines for various purposes already , you cant denote them to charity because theyre electric  and it would be a shame to break it for parts .  Munchkin keeps batting his eyelashes at it , he killed his posh beginner machine earlier this year , hes still fascinated with all things crafty so once i have the space i may run her in for him . 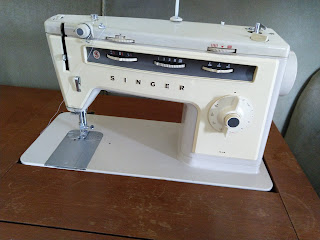 This week theres a village Jumble Sale Billinghay 2pm church hall Victoria Street for those of us who need our Jumble Fix
Posted by kate steeper at 02:03