Well ive had a very boring weekend never ending vehicle problems meant i got to a single jumble sale , no car boots, nothing . gutted when the weathers been so glorious .But on my usual £1 budget i picked up these . Ive been good and chucked a load of books into the charity sack lately but I just cant leave buttons behind , they needed a home didnt they ? 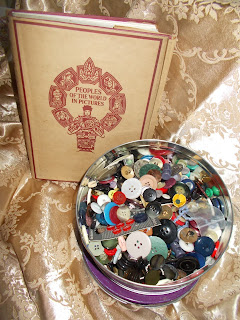 So today I had to pop into Asda aka Walmart, just for the usual bread milk and something masquerading as butter . Last week we went into Lidl for a wander. Now today in Asda I noticed something odd , im rather partial to the German meat products that Lidl sells you know the weird sausage type items that you cant pronounce I get them for a treat for Mr Bah Humbug , but Asda has started selling many of the exact same pork items at about half the price of Lidl , very odd, they also sell a huge range of Polish food quite cheaply , now Boston Asda is located in little Gdansk where all the Eastern Europeans live so i've no idea if this is just certain branches or if its countrywide , theyve also stated selling a huge range of pastries freshley cooked , just like Lidl , pickles just like Lidl but all significantly cheaper . They also have a Lebanese food range , go figure? not many Lebanese in Boston .
Meanwhile i'm still waiting for Armageddon , I didnt bother with the washing this weekend just in case ,
anyone know what the next predicted date is ? Mr Bah Humbug just informed me we have 2 months of utter blackness to look forward to according to NASA, amazing what helpful facts you get sent on Facebook isnt it ?
Posted by kate steeper at 09:07