On The Naughty Step

I went to a sale on Saturday and now im in the doghouse ...lol
I had to ring home to ask for the van and it was still full of all of Mr Bah Humbugs fishing gear , it generally lives there all summer and he was only saying the other day he needed the boys to put it away for him , there was no rush , I didnt have to pick up till Monday , but as men do hes got a bit of a monk on with me . Its not just that , i'm supposed to be running everything down for the builders coming at the end of the month .
But hey the sale was cheap , what can I say , so today we went to pick up and filled the van to the roof , he was so mardy he wanted everything out of the van today , so ive had a fun time in the sunshine and biting wind . Ive had to be quite ruthless, mainly due to lack of storage , so heres the first couple of lots . 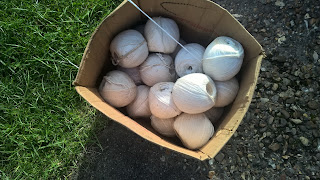 Loads of weird wool , two big bags  . Lots of part wool cones . And a mystery box of what looks like rather grubby balls of string , its not its multi threaded cotton something but im not sure of its purpose ...ideas anyone ? 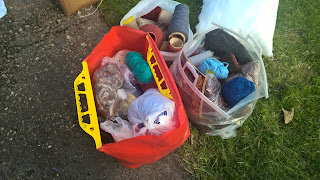 Then I sort of bought a load of toys , OK maybe theres a few dolls in there , a lonely Tressy and a few little friends , but theres also a Sindy caravan and stables , lots of Sindy furniture , tons of Sindy accesories , loads of dolls clothes ...etc etc . There was a load of modern toys as well that are going to the charity shop 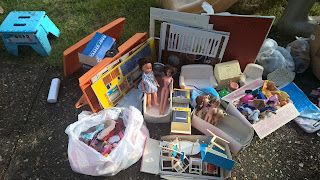 , this will take forever to sort out and clean  , so i may have to hide it ...lol
But ive been ruthless the vans half full with stuff to go to the charity shop , at least till my daughter comes home and says the van contents are stuff that will sell ...lol
Posted by kate steeper at 08:52