Sorry ive not been around , the real world has been eating my time , I have a new work stream that is a bit of a time eater , I can understand why nobody has volunteered for this stuff...lol...just wish it payed more . Once again im working for pennies , they threw me £20 for fuel the other day ,better than nothing ,but it doesnt go far in rural Lincolnshire .
On the Young Baldrick front theres still no progress, one more week till his doctors appointment . Though he has excelled himself this week , im not taking bets on his survival , death by sibling is looking more and more likely , plus my evil mother has been putting the boot in , her suggestion was to leave him in the woods and forget the trail of breadcrumbs . Meanwhile Mr Bah Humbug is just getting more and more depressed by the situation , we really cant afford to keep him . Plus he is very much a cuckoo in our nest he doesnt live to the standards that we expect etc etc , the constant swearing is driving me mad and the munchkin keeps letting words slip out that he thinks its big and clever to use copied from his uncle, he doesnt think its so clever when i get out the bottle of liquid soap and chase him round the house  Its got to the stage where we have to be careful what we watch on the TV because that just encourages Young Baldrick to start cheering the violence on and laughing at crude and cruel behavior . The look of horror when I popped a Christian Evangelical Freeview Channel on the other night was so worth it , 2 hours later i'd frightened everybody into an early night , I enjoyed the peace and the programme was quite good in a very American Christian way... he he he
Then theres Grandad who lives down the road hes Mr Bah Humbugs ex father in law and his other son lodges there because he can have a big bedroom and quietly keep an eye on Grandad . Grandad has been terminally ill for 2 years , he refused treatment , went off and got on with it , they always seem to be surprised that hes still turning up for his hospital appointments . Hes been a bit poorly , so its affecting my stepson quite badly , he needs out help and support as well . The question of where he will go once anything happens to grandad is a big one . Mr Bah Humbug has always remained good friends with him , so thats more pressure .
So thats enough of human misery for now, heres my sole little crafty effort for the week , cake plates take a 99p clock movement so well ,she  just needs a hanger and i have a crinoline lady clock . 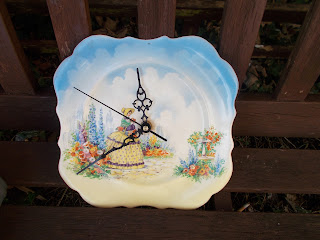 PS ...in theory I have now got the comments problem fixed, please comment and we shall see, I can only apologise on googles behalf for all my comments mysteriously vanishing .
Posted by kate steeper at 06:42