So its been a funny old week , we are officially without a vehicle and Mr Bah Humbug is going round the twist , his vehicle miserably failed its MOT and is parked on the drive in bits as we speak . Now he hasnt had his usual helpers , his eldest and young Baldrick , hes had to make do with my youngest whos the only one currently at home , hes also the least likely mechanics helper on the planet , this is a young man who has a squealing fit at a spider and if he chips his nail varnish he has an episode ...lol ..Theyve been out there for 3 days , Mr Bah Humbug sat on a plastic patio chair supervising and Will under the vehicle , I havent heard a single shout , though Will keeps coming in moaning at oily hands and the condition of his nails , Mr Bah Humbug even admits that Will has done really well, actually listens and tells him when he doesnt understand and that its beyond him how he hasnt been able to get a job . Well ..the last verdict at his endless Job Centre course is that hes not pretty enough and doesnt present well. You see he has really bad skin , acne is the bane of this family , he refuses to go back to the dermatologist , they admit theres nothing they can do , because the stuff that could work cant be given to someone with a history of depression , does it cross there mind that his skin is why hes depressed? 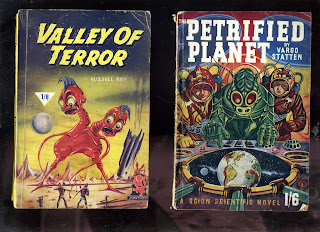 Ive managed to borrow my daughters car for a couple of days ,just to catch up on some holiday jobs id picked up , so ive done the scenic tour of grimsby , cleethorpes ,immingham , scunthorpe and gainsborough  and i bought nothing , it was a thrift dessert full of overpriced rubbish but I did spend my £1 lunch money at the Moorlands relate back in Lincoln , all this for a £1 !! 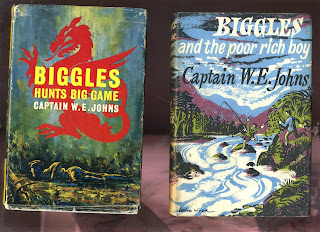 Dont you love vintage 50s sci fi book covers , these are very tatty but gorgeous , still debating what the hell to do about ebay , now we have no post office and no transport , ive run my stocks down , with a few car boot sales and im trying to be more selective about what i buy .

Building up my reading stocks for the winter , even found a couple of Biggles books , but im also building up my usual pile of varied crap , i cant read the same genre all the time , it becomes to monotonous, about the only thing i wont read is chick lit , if its got a pink cover its not for me . so in my £1 bag i purchased 9 books , which then go to car boot in the spring . 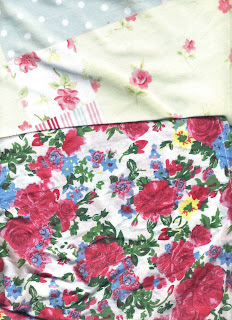 More fabric for the piles , still hand hexy quilting myself into infinity , not sure quite where this is going , but its half a duvet cover and more flowery cotton ...
Im at home for most of this week , so I may get some crafty projects finished , but its veg garden season and im having to water by hand, due to Mr Nobody having strimmered through the hose pipe , ive developed the arms of an orangutan, its a long way from the tap to the veg ...lol  connection is on its way from China for a whole £2
Posted by kate steeper at 02:28