The Lackluster World of the Poor

Im still here!!  Just been rather busy ,the few days of nice weather have meant that working and major yard chores are eating my life , not a jot of crafting have i done and ive spent a whole 10p on thrift items , i do love a bit of Spanish Holiday tat . Mr Bah Humbug has threatened to have me sectioned if I get a donkey with a sombrero . 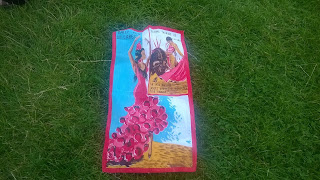 Its been a strange week it was the munchkins School Fair and Granny had to attend , now ive always been a ,so long as they arent maiming other children let them get on with it kind of parent and im just as bad as a Granny , dont fret the small stuff they grow up into great adults . So munchkin was rampaging round the school fair with the parents looking on in horror his teacher meanwhile just smiles and says he enjoys life so why not . But then it gets to the big raffle and they had excelled themselves this year . There was some pretty amazing prizes , his little friends name comes out and he proceeds to have a spectacular melt down when his mother leaps on the spa day prize and he wants some tacky toy .
Then a few names later the Munchkins name comes up and he marches up to pick a prize and he picks ......a huge sack of logs . His headmaster looks at him gone out and then says wouldnt you like to go out for pizza ? or bowling? The Munchkin draws himself up and says ..I have a use for them!!  he looked and sounded so like his great grandad it was scary . The bag of logs was bigger than he was but he dragged them back to the car .
When he gets home he passes Mr Bah Humbug on his way to his bedroom with his sack who looks at him gone out and asks if hes living in a parallel dimension.
So what did a seven year old want with a huge sack of logs? Well we dont have a wood burner or fireplace so even I was intrigued . When I went upstairs he has them all lined up on his bed wearing a pair of his underpants each, he then decided that he liked one particular log and this is now Loggy his new best friend who he sleeps cuddled up to at night . His mother then went up the wall because hed decided to put them under his bed to keep his pet woodlice in !! I'd sort of forgot to tell her about the boxes and jam jars of creepy crawlies he keeps hidden up there . I got a long lecture about encouraging his weirdness..lol
I have been informed by the Munchkin that Mr Bah Humbug has given Loggy a face and its currently in his school rucksack so mummy cant burn him...lol  We are also going to build a wildlife home with the rest of the logs , so he can collect more creepy crawlies !!
I'ts great being a granny !!!
Posted by kate steeper at 13:32