Sometimes you have to chuckle, my mother is  up in arms after her heir  hunters episode , they contacted her regarding a cousin that shed killed  years ago, not literally she had just told everyone she was dead . It would seem that our family history is just as bad as the ones televised, I already knew we had jailbirds not it looks like we can add illegitimacy and bigamy to the family tree so she wont  be getting a big fat cheque..lol 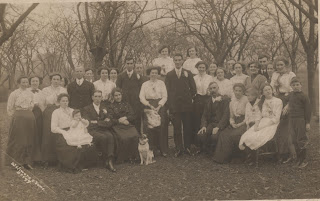 So lets talk about the nicer side of the family my  dads Lincolnshire forbears  this is the wedding photo of  my grandparents, Ivy Clara Exley and (jack) John Andrew at Barrow On Humber in 1917 , my grandmother was in service at Barrow Hall , my  grandfather was going off to war . I know who some of the people in the picture are  but  not all  .  A couple of my uncles did a lot of family history research , but i had all the ephemera i managed to rescue as a child plus bits my Granny had told me , plus now i can look back and patch various family stories to make a whole .So lets put it together in modern terminology  They had 7  children , 6 made it to adulthood and a couple are still around as far as i know . Jack was a bit of a rum lad in his day and liked the ladies , he was a coal merchant and lorry owner so he got about a bit. Grandma had to many children  to quickly and the last couple were sickly to boot so her sister was dispatched to help , 10 years younger and single . The trouble  was Jack took a shine to her and back in about 1930 the inevitable happened and they had to run away leaving my grandma with 7 kids .
Now Lincolnshire in the 30s was a different dimension , it was viewed to be my grandmothers fault and she was threatened with the Workhouse if it hadnt been for Jacks family helping her find a tiny 2 bedroomed cottage that  was where she was going, nobody would rent to her because of the disgrace  , one daughter died of diptheria because they couldnt afford a doctor . My dad hated his father he had  just passed to go to Grammar school but was forced with his brother to go to work in his uncles flour mill , the eldest girl had to go into service. My dad would never allow any mention of his father even on his deathbed in the 50s he refused to see him . his dad had  built another family in Rugby there  was no divorce in those days .
It seems strange now but even in the 50s and 60s the family were shunned for what had happened , they all had to marry out , because they carried the stain of immorality , even as a child there were people warned not to play with me because of my family name .
But the saddest thing of all was that when my grandmother died she still had all his postcards sent during their courtship and from the trenches hidden away and  i have them still . There was never anyone else for her  but him .
These days  this story wouldnt warrant more than a bit of gossip , it wouldnt even make Jeremy Kyle but back then it was the scandal of the county .
Posted by kate steeper at 05:34