Twice in one week , this time I spent a whole 45p with Mr Bah Humbug shaking his head in despair. The Pyrex he could see a use for but my other little gems baffled him .
I had a feeling the little Edwardian scene in the photo frame was original , on taking out it was a 1905 postcard announcing a birth , to someone in Waddingham , which has a lot of family connections with my people . Then there was a little bag of patches the two tiny iron on ones will be used on something of Mr Bah Humbugs just for the embarrassment factor , serve him right for still, despite being a cripple, making holes in everything he owns . The third patch is gorgeous woven ribbon that will be staying for a while . 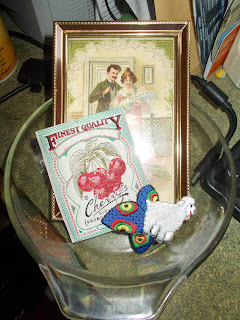 Meanwhile this morning it was wake up to a hellish frost , knew it wasnt going to be nice this morning as we went to bed last night to find the cat curled up in the duvet and there was no 5am howling to go out , in fact hes just been down for his breakfast then gone back to bed ...its a hard life.
Posted by kate steeper at 02:03