So im back , from the depths of gloom and bafflement , non the wiser, but life is busy taking its weird turns yet again . Yesterday was the first normal , take me to the jumble sales i need some stress relief day and i had company . Middle son , now relieved of grandad duties has shown an interest in getting out and about and he likes finding all manner of strange gaming and electronica for pennies . The main problem is that hes a big lad and can carry almost anything , think Ginger Desperate Dan , they share a build and a cow pie wouldnt phase him in the slightest . I feel like a dwarf at the side of him . the plus side of this is that i can buy big stuff and he just carries it effortlessly ..lol
Real world problems are surfacing yet again , son needs to find somewhere to live , hes still at grandads at the moment , he has the option to stay as long as he wants but even he admits he cant afford the running costs of a big four bedroom detached, even if he gets a job straight away.  We dont have the room but daughter is applying for mortgages and looking at houses so longer term he could be coming here , but hes not that keen,  hed like a bit of independence, hes 24 and gave up all the usual teen and youngster stuff to look after grandad and grandma who had Alzheimer's.
I did scare him and Mr Bah Humbug to death yesterday , all i suggested was if he couldnt get a job he could look after his dad and i could go back to work , the looks of horror on both their faces was well worth it ..lol 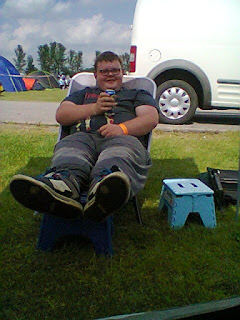 taken when he was a teenager , posted just to embarrass him..lol
Posted by kate steeper at 00:56