Today we shall discuss the coming of the Apocalypse ...aka ...Universal Credit , we are fortunate that its not scheduled till next July here , the first big push starts at the end of the month in a lot of areas .
Never in the history of mankind has a good idea been so badly organised , when it was first announced there was supposed to be huge cost savings by combining all the benefits together , quite a good idea .  Then the Tory Party gave the job to various cronies and American companies and it has turned into a witch hunt on the poorest and most vulnerable .
Number 1
The Housing Benefit scandal
they are no longer going to pay peoples rent direct to the landlord , already every to let sign going up has  No DSS on it , this should be shut down hard , its discrimination the like of which hasnt been seen since the 70s , the good old days of landlords evicting people because they were poor or disabled . Doubtless we will have loads of programmes to cheer up my mother along the lines of Benefits and Bailiffs because there all scroungers out there .
Number 2
The 2 child rule
You will no longer be able to claim anything extra if you have more than 2 children . Seems fair enough why would you want more kids if you cant afford them . This was supposed to only affect those who were born after a certain date . What they forgot to mention is that any change to your benefits means that those who already have more than 2 children will lose the portion of their benefits for the extra kids so thats a whole generation blighted because they are worthless .Also is it 2 kids to one mother ? or will men still just wander around breeding any old how . My mother will enjoy Benefit Breeders the new tv programme or have they not already done that one ?

Now I will get out my crystal ball and look to the future ..lol
The Government has decided that due to the single child rule each teenager must care for 10 frail elderly , while holding down a 60 hour working week at the incontinence pad factory  .  this of course is a good thing , they will inherit all the belongings and property of the elderly they care for . After 90% death duties of course .
Due to the lack of low skill labour the rich will be buying foreign staff from Amazon, thats if they can find any foreign staff who are willing to come here ..
I could go on and on and on , but instead heres a pretty knitting pattern , from the days when you could have kids ,stay at home and be a mother , cook wholesome food and be everything that the feminist sisterhood fought against 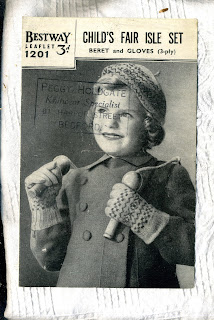